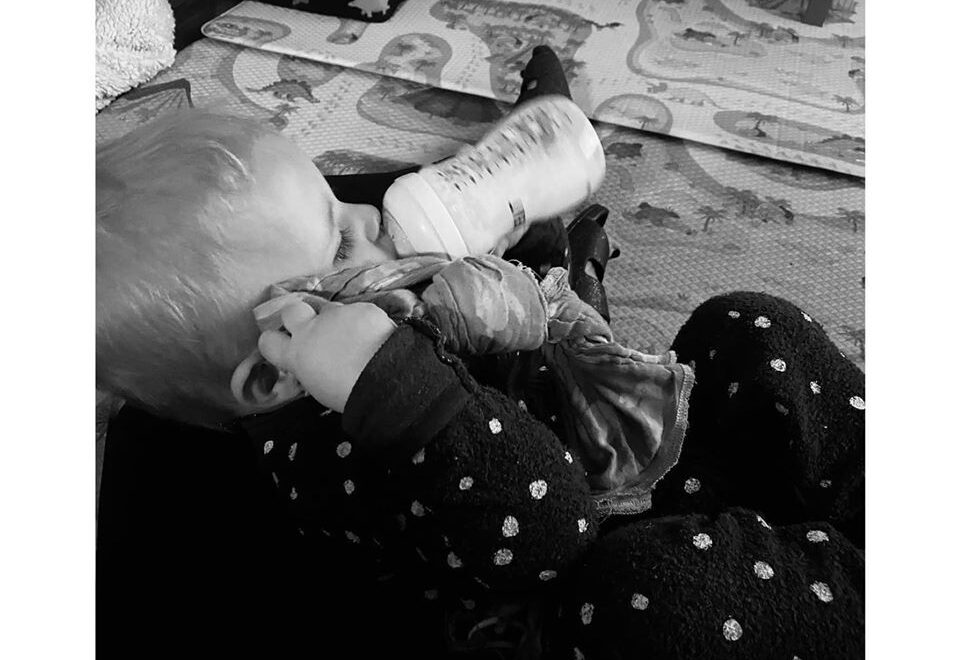 P2b recommends ditching the bottle before or around 18 months and no later than 2 years of age:

Exceeding amounts of milk past 18 months can lead to health problems. These problems include obesity, iron deficiency anaemia, tooth decay and middle ear infections if the milk is drunk from a bottle.

From 12 to 18 months, milk should become part of a meal, not a meal in itself. It is important to remember that milk is a food, not just a drink to quench thirst. So if a child has a bottle of milk after waking, it is understandable that they won’t be hungry for breakfast.

This extra milk can fill toddlers up and therefore replace other foods in their diet, especially iron rich foods such as meat, iron-fortified breakfast cereals wholegrain foods, grains, fruit and legumes. While cows milk provides important nutrients, it contains very little iron. So if a child is drinking more milk than needed, and eating very little or no iron-rich foods they are at risk of developing iron deficiency. Iron deficiency can cause fatigue, listlessness as well as affect behaviour, cognition and motor development, physical performance and concentration.

Other risks associated with the overuse of bottles are tooth decay and middle ear infections, especially if the child lies down while drinking or is given the bottle to go to sleep. The constant contact of the teeth with the sugar in milk given from the bottle causes tooth decay. Tooth decay is painful for children and often requires a general anaesthetic to treat it. Recurrent middle ear infections are also painful and can have long term effects on hearing.

I hear you all saying “But they like the bottle and it is part of the routine of going to bed”. It’s true that some children will protest at stopping the bottle. However, they will get used to a new routine such as books, songs and cuddles before going to bed.

Parents often report back and saying it was much easier than they thought it would be AND their little ones diet has improved dramatically. In fact, parents cannot believe how much more their toddler eats!

So when ditching the bottle, remember you are doing it because:

1. Children don’t need milk from a bottle after about one year – max 18 months of age
2. Too much milk can replace other foods in a child’s diet and lead to iron deficiency
3. Children who drink only small amounts of milk from a cup, can get enough calcium from yogurt, cheese and custard.

Please remember these are P2B thoughts & recommendations and may not suit your child or your family.

Please contact your GP or paediatric dietitian for one on one advice.